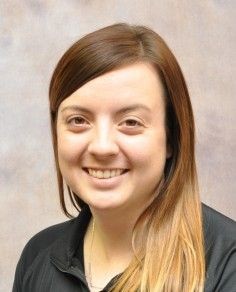 Michelle has worked as a pediatric speech-language pathologist since 2011 at Madonna TherapyPlus. She received her bachelor’s degree in 2009 at the University of Nebraska-Kearney and then went on to receive her master’s degree in Speech-Language Pathology in 2011 from the University of Kansas. During this time, she completed a rotation at St. Louis Children’s Hospital focusing on augmentative and alternative communication (AAC) in the inpatient and outpatient settings. Since starting her career at Madonna, Michelle became specialized in the area of pediatric feeding and swallowing, is trained in VitalStim and has been a clinical instructor. Michelle is a primary speech-language pathologist on the Pediatric Rehabilitation Day Program team and feeding-swallowing team. She focuses on seeing pediatric patients of all ages who need feeding-swallowing therapy but also sees patients with speech and language disorders. When not at Madonna she enjoys spending time with her husband and daughter and extended family and friends, cooking and baking and being outdoors.