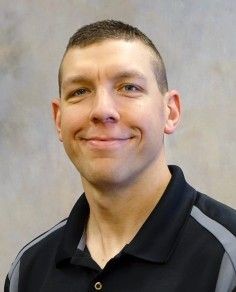 Doug Tvrdy has been with Madonna since 2004, the same year he received his Doctor of Physical Therapy degree (DPT) from the University of Nebraska Medical Center. He received his Strength and Conditioning Specialist Certification (CSCS) in 2003 and his Orthopedic Certification Specialist (OCS) in 2007. Doug earned his Bachelor of Arts in Biology from Hastings College. He has had two articles published in the Strength and Conditioning Journal (The Reverse Side Plank/Bridge: An Alternate Exercise for Core Training [April 2012], A Novel Technique: Strength Training for American Football Tackling [February 2011]), as well as served as an expert reviewer for Sports Health, Strength and Conditioning Journal, and Physiotherapy Research International.  He has also been a guest lecturer at Creighton University’s Orthopedic PT residency program.

In 2016, Doug took over the Madonna TherapyPlus RunWell Program, a service that works on correcting running mechanics through the use of video analysis and personalized exercise techniques to correct mechanics to prevent injury and increase performance. Doug also works with a variety of orthopedic (spine, knee, shoulder and hip) conditions, including post-surgical rehabilitation.